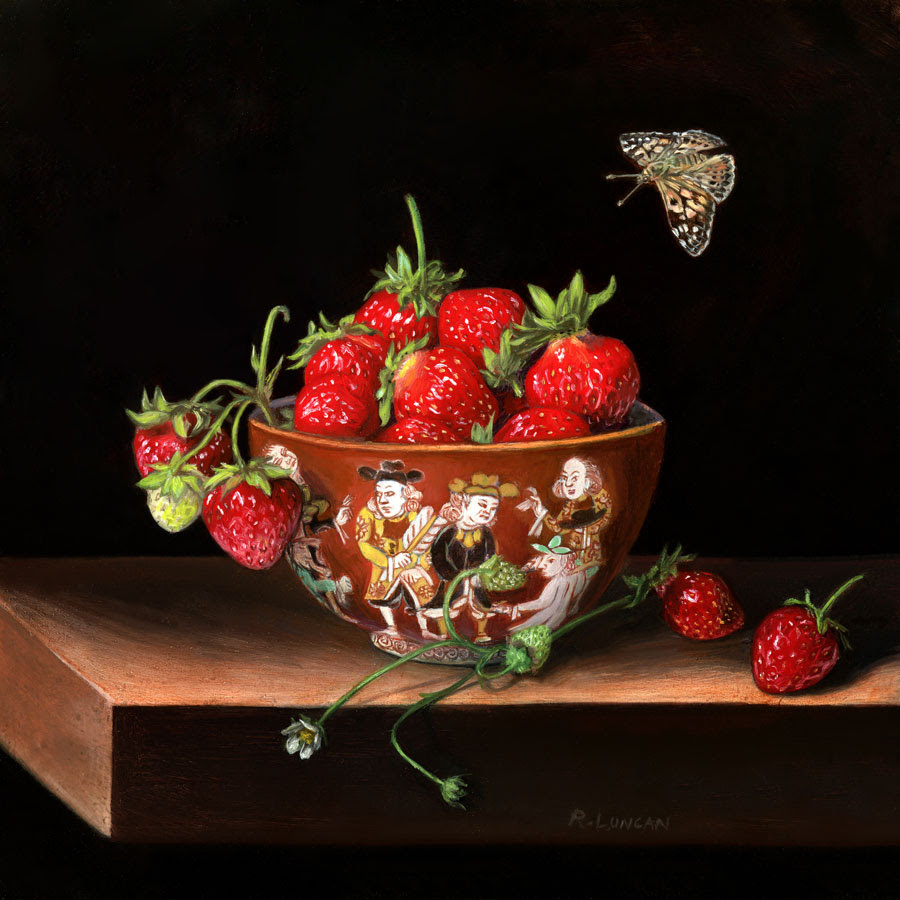 I have a quarter acre garden, and strawberries are one of my top crops. This month’s strawberry still life painting features my June Bearers (one of two types of strawberries). At the height of my amateur gardening career (before having my son), I picked three quarts every day for a month! If you knew me then, you ate my strawberries.

Now that Isaac is three, I have more time to spend in the garden. The strawberries are slowly making a comeback after some intensive weeding (come by if you want some!). I wanted this painting to be a bit of an overload of warm colors, with slight touches of green. Pairing strawberries with this Japanese bowl from the SAM collection and a Painted Lady Butterfly did the trick.

This bowl is perfect, not only for its colors, but also because the imagery is relevant for this series. The bowl was made around the same time as the famous Dutch still life paintings that inspired the In Season Monthly Miniatures, and the Japanese artist has depicted European traders, very likely Dutch. The figures are as exotic to me as they likely were to the artists who first painted them.

Sign up for the newsletter for a chance to purchase next months painting! Read the text by SAM’s former Curator of Asian Art, Yukiko Shirahara, to learning more about the porcelain bowl:

“Southern Europeans, primarily Portuguese and Spanish, arrived in Japan in the 16th century. The Japanese called them nanban, or “southern barbarians,” because they came through a maritime route from the south. The term nanban, however, was used to refer to almost anything foreign in 16th- and 17th-century Japan. Images of Europeans proliferated in response to the curiosity of all things foreign, and became common motifs to adorn ceramic wares such as these bowls.

European figures were popular motifs in Japanese art during the Edo period, particularly representations of the Dutch (called komo: “red-haired people”) because of their direct contact with Japan through trade during a time of national isolation. It was the Dutch East India Company that exported Japanese products, including Imari porcelain, to Europe. Dutch motifs were favored not only for exports but also for the domestic market, to satisfy the Japanese taste for exoticism and curiosity about Western culture. The familiar design of “five-ships,” depicting five Dutch vessels with Dutch figures, is the best example of the popular theme, which appeared from the eighteenth century onward.”