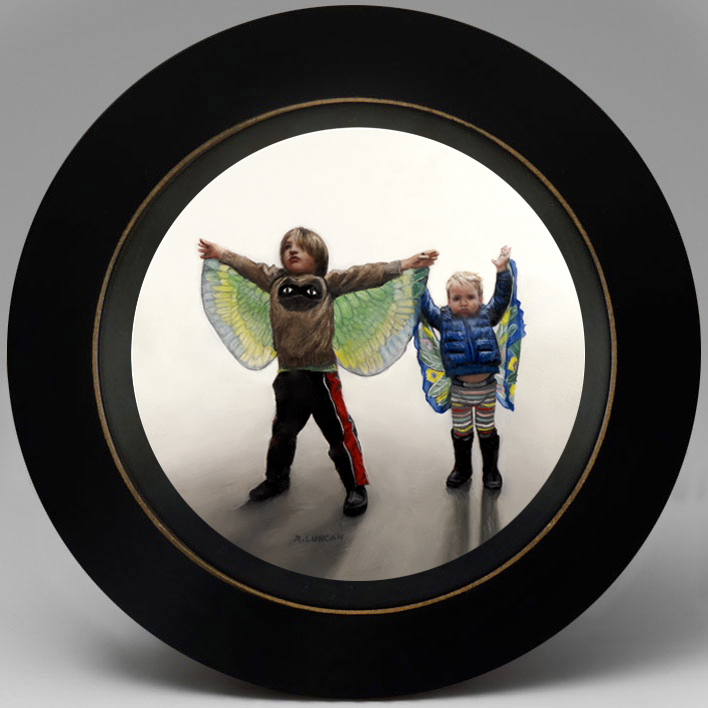 This month’s miniature portrait of brothers features the sons of artist Jennifer Zwick. Jenny is a fixture in the Seattle art community, and I’ve known her since long before she had kids. I’ve always been a great fan of her work, her contagious grin, and her breathtaking beauty (I’ve nicknamed her Snow White, and yes, she is the fairest of them all!). I did a painting of Jenny once upon a time, and I’ve been excited to make a portrait of her boys. I originally imagined a classic miniature, but these two just didn’t quite fit the mold. Jenny sent me dozens of images, some of which fit my original idea, but there were so many goofy shots. These kids are definitely raised in a very creative household, and I felt more and more that their portrait should reflect this. There were several images that fit, but I love the expressiveness of the two of them in this image in particular. You see so much about their relationship, and capturing it in a painting was worth the madness of painting such tiny faces and hands.

This is the smallest-scale portrait I’ve made in a long time, and if I never work so small again, I’ll be glad the last time was for Jenny. Please take the time to enjoy a peek into her life as an artist mom, through her words and images below.

Please visit the gallery of Monthly Miniatures, and learn more about all of the Artists featured in the series in the Archive.

Words from Jennifer, on being an artist and mother: My first thought is to write about how the restrictions of parenting have affected my work: how, when I was first pregnant, I could no longer build large sets, so instead made tiny wearable rooms (which I call “head sets”) with dollhouse hardwood floors and framed artwork which attach magnetically and look hilarious and unreal; or when I was pregnant a second time, and so large I could barely move, and my art grew even smaller still, making miniature watercolors of Nintendo game systems.

But if I focus away from how parenthood makes one’s artistic career smaller (no residences; harder to attend openings; expensive child care; higher stakes and confusion about if making art really is a priority), I see that it was a very natural thing for me to incorporate parenthood into my artistic practice and output.

Before pregnancy, my work often focused on what I experienced as a child – things I thought might be possible, or wished could happen, or might as well have.  My obsession with optics, with the disconnect between how our senses literally perceive the world, and then how our brain translates these into the impression of a coherent experience, this was amazing to see firsthand as my children learned about object permanence, or how proximity affects scale (older son’s first airplane trip: “when do we get small?” since he’d only ever seen airplanes flying overhead, in perfect miniature distant detail), or what aspects of a world we will completely take for granted, and what sticks out as wrong, or as special, or as notable.  One ongoing photo series of mine involves building set-based narrative photographs depicting young girls in surreal circumstances, staging remembered childhood ideas and atmospheres.  I was recently able to create several new images, and for the first time, there are adults – two of the photos have mothers; one with her daughter, and one hugely pregnant. During my first pregnancy I had a show called “Partum” which was hung in three sections: First Trimester, Second Trimester, Third Trimester – the work was all very distinct, as I adjusted to giving up Ritalin, then as I became anemic, and then as I dealt with acute nervousness and humor about the impending birth.

Recently I revisited a photograph I made for that first “Partum” show, which was about how the female body is treated as a public object. For that photograph I stretched chaotically patterned fabric on a frame, cut a hole in it, and stuck my third-trimester belly through. Photographed head-on, it is a strange exercise in depth, with the flat fabric directly parallel to the picture plane, and the belly jutting out, impossibly round. In the new iteration, I mounted the life-sized photo on foam core, cut the belly button out, and attached it to a small motor which I wired to rotate, comically spinning in the middle of this huge belly, just as weird and humorous and insane as it is to grow a freaking person in your body.

Whenever possible, I love having my kids help with my projects, building or installing or whatever won’t 1) derail the project 2) ruin everything or 3) kill them. Additionally, making large-scale art projects means I end up with interesting and odd materials – one project involved taking site-specific photographs of banal locations at Seattle Center, then printing them out life-sized and reinstalling them on location as photo opportunities.  In order to ensure I had the exact right focal length and composition I made several rounds of large black and white test prints at copy centers.  I did not end up creating a piece at the Kobe Bell Pagoda location, so my then 5-year old son had a great time using all the huge images for his own purposes.  One of them became the backdrop for a “play” he wrote about ghosts, and we brought it to the pagoda and he performed the play (which involved a surprising amount of jumping in dried leaves). From Jennifer about her artwork: Trained in photography, I work in a variety of media, including large-scale installations, wearable sculptures, painting, interactive video installation, printmaking, and photographic processes. I am particularly interested in optics, symmetry, humor, one-point-perspective, anxiety, repetition, repetition, and repetition.  I create artwork which requires the viewer to reorient themselves, using one-point-perspective, in- camera techniques, site-specific construction, and sculptural installation, presenting nonlinear narratives depicting the fraction of a second where something fundamentally concrete is shifted just enough to turn an ordinary moment into something gently surreal.

I firmly believe that by making art which looks fantastical but is constructed rudimentarily, “in real life”, an opportunity is created for the viewer to think about what we will accept as real; about how much our brains miss when we move through the world; about what we take for granted and how much power we truly have to reshape our reality.