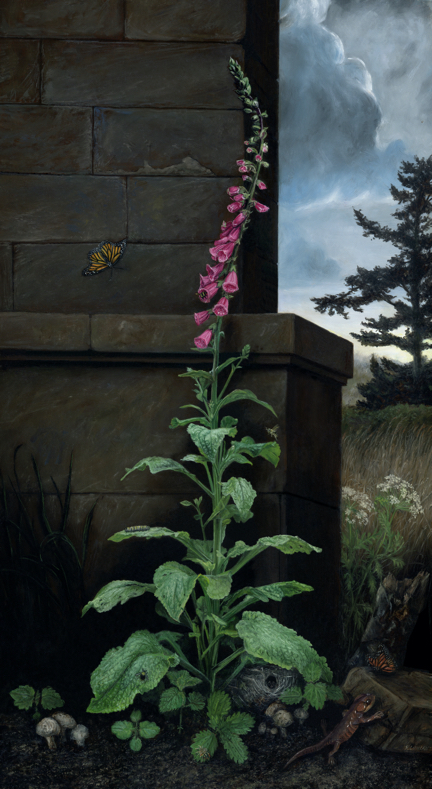 In my “In Season” Monthly Miniature still life series, I studied and paid tribute to different artists of the Dutch golden age of still life paitning throught the year in which I completed that project. One of the artists I stumbled upon was Otto Mardeus van Schrieck. He created these incredibly detailed paintings that so perfectly contrasted the dark and light of the natural world. For that series I made a painting titled, “Forest Floor with Rabbits“. This painting was quite different than the others in the series that were more tradidional table top still life paintings. I think it was an important one to make for me to understand more fully the genere of still life in the 1600’s though.

I’d been toying with the idea of dedicating my next series of miniatures to “forest floor” paintings and decided on something different. When I got the invitation from Antler Gallery to participate in their Poison Garden exhibit I immediately knew exactly what I wanted to paint.

Years ago, I invited my neighbors foxglove flowers into my own garden when she was digging them up in fear that her dogs would eat them. The poisonous but beautiful flowers quickly bagan popping up in new places throught my garden and I encouraged them. When I had my son, however, I began to question that decision. Especilly since he loved foraging for different edible berries on his own. I began pulling them up, but there was no way I could get them all. The model for his painting is one of my survivors. My son still forages, but he’s a quick leaner and is very careful around the flowers. He actually held up a huge sheet of black paper behind the plant for me while I photographed it for reference for this paitning so that I could make the shadows and highlights more accuratly.

I included insects that are also poisonous, some with stings, others bites and I didn’t know this, but most butterflies are also toxic. Not that I’ve ever tried to eat one.

I hope you enjoy the painting and I hope you’ll go to the Antler Gallery website to see some of the other artists beautiful pieces for the exhibition.