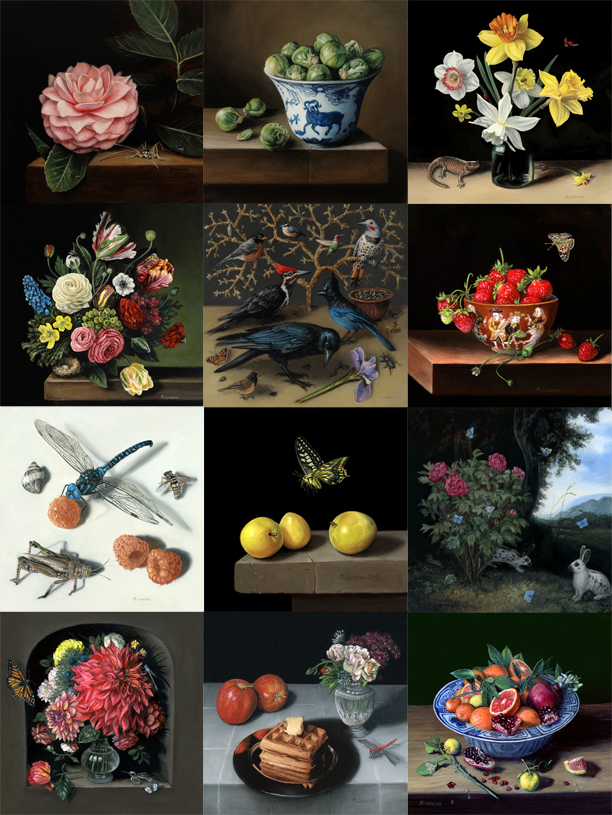 Each year I do a themed Monthly Miniature series and for 2019, I painted still life paintings. For much of my art career, I’ve been a “figurative” painter. Meaning almost all of my subjects for my paintings have been human figures. Since I first started my Monthly Miniature series of rabbits several years ago however, I’ve been inspired to enthusiastically embrace new subjects.

There’s nothing too terribly new about still life paintings. They’ve been around for hundreds of years and though artists are still creating beautiful, creative and inspiring works today, the basic principals are the same. My inspiration for the series “In Season” goes back to the roots of the still life genre.

Before starting this series, I had only made one still life painting in the last 15 years so a refresher art history course really helped. The artist of this genre studied in Northern Europe and were at their prime from around 1600 – 1800. Though I examined the artwork made by more than two dozen artists, each painting in my series had one predominant artist that influenced it. I’ve listed them all below, and upon close inspection, you’ll notice some duplicates.

It’s really hard to pick a favorite, but if I was forced to choose, I’d go with Adriaen Coorte (whose name you’ll find three times). His paintings are easily identifiable in the genre of Dutch Still Life’s because his paintings are unusually unpretentious. Another name you will find more than once is George Flegel. His paintings were more complicated than Adriaen’s, but the way he spaced the items in his compositions felt very ordered. The balance of objects felt sensible to me and I kept coming back to his work. I tend to like simple compositions and studying his work helped me feel more comfortable when I wanted to add more objects to my compositions.

In Season vs Seasonal Impossibility

One thing that struck me about the historical paintings was the fact that they often feature blossoms, insects and food that could not be found out of hibernation or in season at the same time. They are constructs of seasonal impossibility, pieced together from earlier studies, signifying impermanence and the perception that earthly life is transitory. For my series, I wanted to do the opposite.

In Season pays homage to Northern European still life, while also contrasting modern and past experiences. Expectations have changed; perennial availability is the norm now, and seasonality is hardly acknowledged. In Season features combinations of fruits, flowers and insects that occur together naturally, in appreciation of the beauty of the cyclical and ephemeral. Most modern viewers looking at a Dutch still life would have no idea that tulips and chrysanthemum would never bloom together.

Keeping everything in season took a lot of planning and compromising. Lucky know a floral designer and have a 1/4 acre garden filled with flowers, fruit trees and vegetables (sometimes) ripe for the picking.

Finding the perfect blue blooms for paintings with lush bouquets was tricky. I heavily relied on my sister in law Molly (a floral designer) for help. Finding the perfect spring blue for my April painting, “Flowers, Bird’s Nest and Insects” seemed so easy at first. I’d mocked it up with Delphiniums and was all ready to start paintings and I sent the image to Molly for her stamp of approval. No Delphiniums till summer! After hours of searching and trying out different ideas, I finally redesigned the composition with Grape Hyacinths instead and got the nod of approval. Similarly an early mock up of my “Vanitas with Flowers and Butterflies” painting included blue anemones. I got the shake of the head again – blue anemones are not blooming in October. I needed the blue to balance the colors, so kept searching and was even happier to include thistles.

You could find just about any fruit, flower or vegetable any day of the year that’s grown in a hot house or on the other side of the globe. It’s interesting to have the limitation though and gives me a feeling of connection to the world outside my artificial constructs.

To learn more about specific works withing this series, visit the “In Season” entries on my blog.