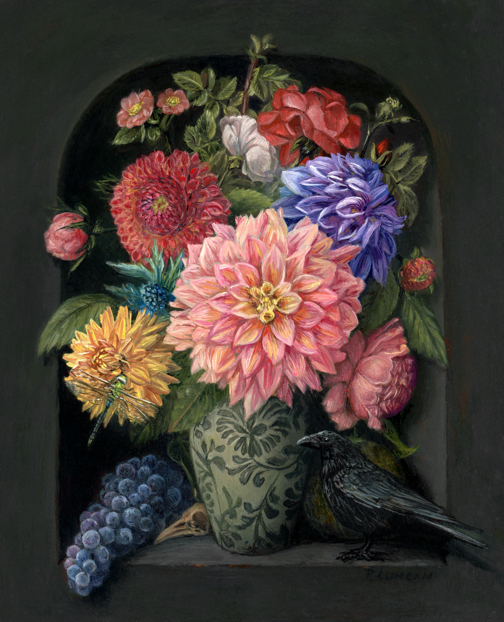 What Was Will Be Again

This colorful painting is made with hopes for the future. We’ve all had our share of negative transformations over this past year, and I am reminding myself and you that not only is our current situation temporary, but everything is temporary. Seeking the best of every situation will keep us strong and help us persevere.

I recently went to the Asian Art Museum at Volunteer Park and found a shocking patch of weeds where the Dahlia garden usually resides. The Puget Sound Dahlia Association, whose members have been planting the garden each year since 1984, didn’t get to plant this year due to Covid-19. I assumed the decision not to plant was to discourage people from congregating in close proximity. They were a favored feature of the park, and I have high hopes they will return next year.

Luckily for me, I also used dahlias in last October’s miniature and had taken dozens of reference photographs that I could use for this painting. I paired the blooms with a Korean vase from the Seattle Art Museum’s collection. I love the subtle colors and the design that reflects the joy of the flowers in full bloom. I want to celebrate and remember the beauty that we once so freely enjoyed and will enjoy again.

I was saddened to hear earlier this week that the Seattle Art Museum’s downtown building would need to close again due to wintertime’s rising Covid-19 numbers. It does make sense to close nonessential businesses to keep us safe. But my gosh, I’m just so happy that I decided to highlight works from the museum back in January. It reminds me how grateful I am to have these beautiful pieces on view to the public, and I hope it reminds you as well. Please think about your local art museum this holiday season. These closures make a huge financial impact, so if you can help them out, please do so. 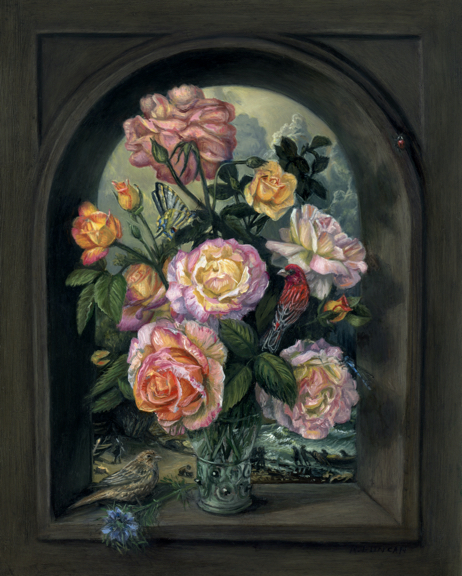 Each painting in this “Flights of Fancy” still life series includes a piece from the Seattle Art Museum collection. Unlike all the other miniatures in this series that included bowls and vases from the collection, the piece featured in this miniature painting is another painting.

Albert Bierstadt was known for rendering these sweeping, romanticized scenes, this one of a place he had not yet been. In this piece, “Puget Sound on the Pacific Coast”, Bierstadt portrays Native Americans and the Pacific Northwest in a scene equally idyllic and dramatic.

The flowers in the painting are peace roses and love-in-a-mist nigella. I worked on this painting during the time when protests began to sweep across the world calling for justice against racial discrimination. My work is not political, but it is very personal. My response is subtle, but it is genuine. I wanted to bring something into the world that held these two ideals. That of peace and love, hence the flowers and the title.

The birds are a pair of house finches, common in the Pacific Northwest, that I found in my pear tree in the back yard. I heard a rustling noise and upon investigation, realized they were mating! Something I’d never actually seen before. I’m hoping that’s a good sign for things to come.