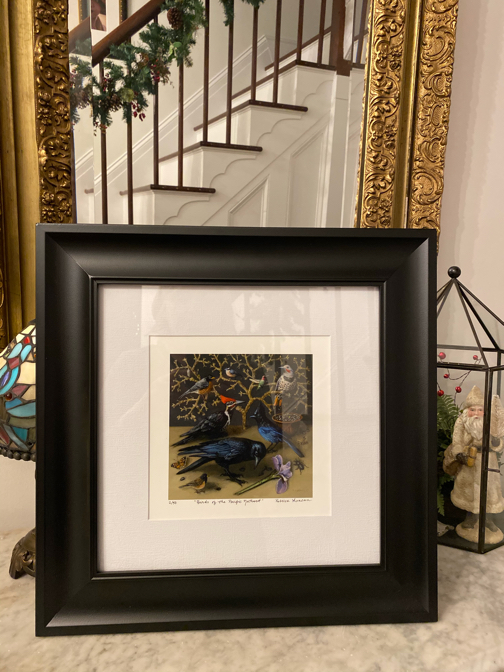 Lots of people had been asking if I would release prints from recent paitnings. I found a local printer I love and am now offering some for sale in my store. I just received several beautiful images from my lovely client Theresa, showing how she framed hers. The backdrop of her beautiful farmhouse in Indiana decorated for the holidays is just magical. I loved seeing these images and I hope you do to!

She very kindly offered to share where she purchased her frames and mats. Contact me if you’d like information on where they came from and I will pass it on! Everything was ordered online and she was able to easily fit them together herself. I’m thrilled to show five new rabbit paintings at this lovely gallery in Olympia. Most art galleries fold within just four years, so Childhood’s End Gallery’s 45th Anniversary is really something special. Please join me in celebrating the birthday of this gem of a space.

Olympia only does an art walk twice a year, and it’s a very lively affair that’s well worth the trip for you Seattle folks, especially if you’ve never been.

Three of the paintings are formal miniature portraits fitted into antique frames. I’ve been holding on to these frames for a few years, and I think I’ve found just the right images to fill them. Take a look below and I hope you’ll agree! A glimpse into the artist’s studio, halfway through the “Monthly Miniature – Rabbits” series

I live on a quarter acre just north of Seattle and this is where you’ll find my studio, in a converted garage at my house. I love having company in the studio while I paint, and some of that company is very furry. My dog Mona curls up neatly behind me and keeps me warm (it can get chilly in Seattle), and rabbits Charlie and Ellie lie on the rug at my feet. It’s a good thing I wear grubby painting clothes anyway, because the rabbits nip at my pant legs to remind me when it’s dinner time. There are plants and birds to see out windows on two sides. Today there are stellar jays feeding on sunflowers.

Though they have the run of the house, the rabbits spend most of their time in the studio. When not under my desk, Ellie naps in her favorite blue chair. Charlie likes to flop on his side on a rug near the wall. And they both like to sit in the windowsill looking out. I love when I’m picking strawberries in the front yard, and I hear people walking by exclaiming, “Oh my gosh, there’s a rabbit in the window!” Sometimes I open the back door and let them roam the yard, but Ellie has become a cunning escape artist, so they’re on house arrest until the yard is better secured. It would also help if the neighbor behind us could resist tempting them with carrot treats.

At 17′ x 24′ it’s a big space for someone working so small, but it’s very full of framing supplies and tools, painting and drawing supplies, lots of art books, and printers. The walls are lined with finished paintings and works in progress. I usually have around six paintings at various stages of completion, in addition to handpicked frames and prepared metal surfaces for at least 20 more. In this month’s “Studio Rabbits” painting, you can see three paintings from my “Open, Closed, Away” series hanging in the background.

I finally convinced my soon-to-be husband (and editor, web developer and photographer) to move his office from a spare room to a corner of the space in here. It’s a big room, and he doesn’t seem to mind having a giant mat/glass cutter mounted to the wall in his area. So far it has been working great, but I hope we’ll be able to keep it warm enough in the winter. My little space heater can only do so much! But we’ll figure that out when the time comes. The bottom of his pants are as yet mostly intact. (There’s a cozy rug under my desk, and I give them more treats.) 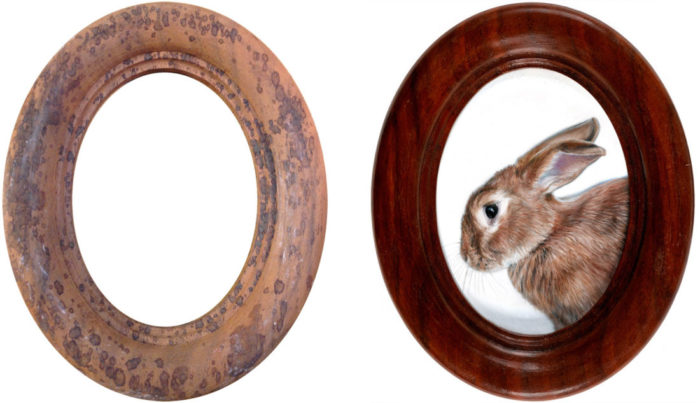 The discovery and restoration of a meticulously crafted, one hundred year old frame for Charlemagne in Profile

My sister is passionate about antiques. Most weekends will find her traveling to different auctions, estate sales, and antique shops, on the hunt for something unusual that catches her imagination. About a year ago, she called me up, excited about a sale of wooden frames produced by the The Castner Picture Frame Company in the early 1900’s. The company meticulously produced frames from scratch for more than a century before shutting down. The Mohawk Building in Cincinnati was left with thousands of uniquely designed frames ranging drastically in size and level of detailing. Wooden frames aren’t a rarity, but wooden miniature frames most certainly are, and here they had them them in abundance!

We excitedly talked on the phone and texted back and forth as the date of the sale approached, and she ended up buying around 60 small frames. I was mostly interested in small circular frames, but thankfully, she couldn’t pass up some beautiful wooden ovals as well. Most of the ovals are unfinished, while the circular frames are almost all primed for painting or gilding. What a rare opportunity! They clean up beautifully, and I’ve treasured each one as I painted or polished it to fit portraits of people and rabbits.

All of the rabbit monthly miniatures are framed in one of these frames, but I chose to highlight this one in particular because the transformation was so dramatic. It was so dirty and covered in mysterious spots that I had little hope in finishing it, but as I worked, the spots disappeared, and the grain became richer and more beautiful with each step of the process. It’s my favorite so far, and I chose to use if for this minimal painting of Charlie, the simple white background allowing the frame to shine.

French polishing is a technique of finishing wood with shellac as the main ingredient. This technique was popular in the late 1800’s for furniture but it is often overlooked in contemporary furniture finishing due to it’s low resistance to damage from water and heat as well as its labor intensive application process. It is still a favorite for musical instruments because of it’s unique ability to be be applied effectively in extremely thin coats leaves musical instruments with a nice clear sound. Many fine woodworkers also continue to use it, especially on antiques because the rich depth of the finish is difficult to rival with modern materials. As my frames shouldn’t come into contact with either heat or water, it’s an ideal finishing process for me.

Clean the surface with denatured alcohol and a soft cloth.

Sand the frame with progressively finer grits of sandpaper (starting with 280 and progressing to 600).

Make a fad by wrapping your soft cloth or cheesecloth around a wad of cotton that has soaked in alcohol. You can now sprinkle a bit of pumice on the frame, making sure to wear your dust mask. Rub the frame vigorously with the fad, and if it starts to catch on the grain, add a drop of oil.

Make a new, second fad, this time soaking in shellac instead of alcohol, and again rub vigorously with as random a pattern as possible. Reapply shellac to the inside of the fad (by dipping the cotton ball) as needed.

Repeat steps three and four a few times, letting it dry for several hours between coats. Pay careful attention that you don’t get too much shellac building up on ridges and valleys of the frame, as you will want these details to stand out. The process of working the abrasive pumice and shellac alternately is called the “British Method” of French polishing. The alternative, using both the shellac and abrasive at the same time is the original, or “French Method”.

Make a new fad using just alcohol, and gently glide it over the surface. You want to remove any oil that may be on the surface and even out the final coat of shellac. Don’t press so hard that you begin removing the shellac, however. At this point, the frame just glows, and it’s hard to stop touching the silky-smooth surface. But stop touching for now, and leave it overnight.

Brush on a very very thin coat of Renaissance wax. Let it dry for 10 minutes, then buff it off with a clean cloth or a stiff brush. Give it another 24 hours to dry and your frame is finished! Now you can touch it.

Shellac: Yes, it’s made from bugs!

The critical material for a french polish is shellac. Made from lac, an amber colored resinous material produced by the female Kerria lacca insect, which forms a tunnel around the insect and serves as a kind of cocoon to incubate the eggs she lays. Shellac is a non-toxic material that’s even rated as food-safe by the FDA and has a plethora of wide-ranging uses. Not only to be found in furniture, it can also be found on your jelly beans, guitar, and in nail polish. It’s relatively easy to harvest by scraping it off the bark of the trees, and refining can simply be done by heating it over a fire then filtering once it liquefies to remove any stray insects or bits of bark. It has been used for centuries to polish furniture in the native countries of these insects, Thailand and India. The french polishing technique, which became prominent in the 18th century, is still commonly used to polish furniture and musical instruments throughout the world today.