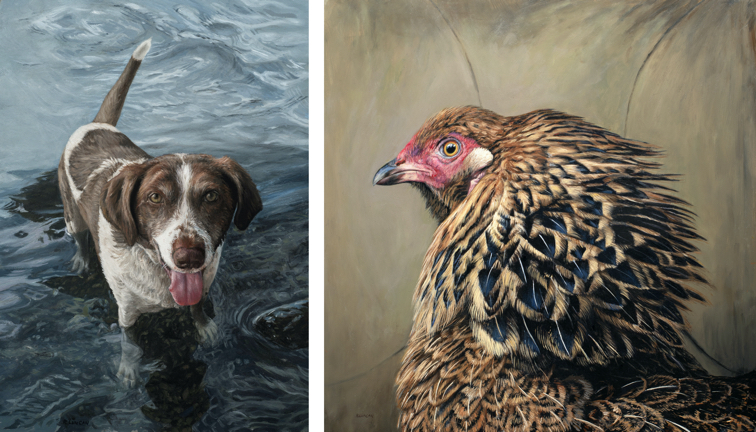 What do these two paintings have in common? They’re both finalists in the Richeson75 Animals, Brids & Wildlife 2020 Competition! Visit the online exhibit to see all of the work included in the show.

Jack Richeson & Co. is a fine art materials manufacturing company and part of their mission is to directly support the visual arts community. They operate the Richeson School of Art & Gallery and have created a series Richeson75 International Art Competitions.

“The Richeson75 competitions are meant to offer a venue in which established and emerging artists may show their latest, best work to a wide and appreciative audience. The 75 finalists for each regular contest will exhibit their work in our beautiful Richeson Gallery and in the online exhibit. The Richeson75 online competitions also reach a wide audience with online exhibits of the 75 finalists’ work.”

All Richeson75 competitions are accompanied with the publication of a collectible, limited-edition, full-color, hardcover exhibit book which includes the artwork of the finalists and other meritorious entries from the competition.

The competitions showcase artwork made in the realist tradition. I’m honored to have two pieces among such a technically well-crafted mix of styles and subjects. Congratulations to everyone in the show!! 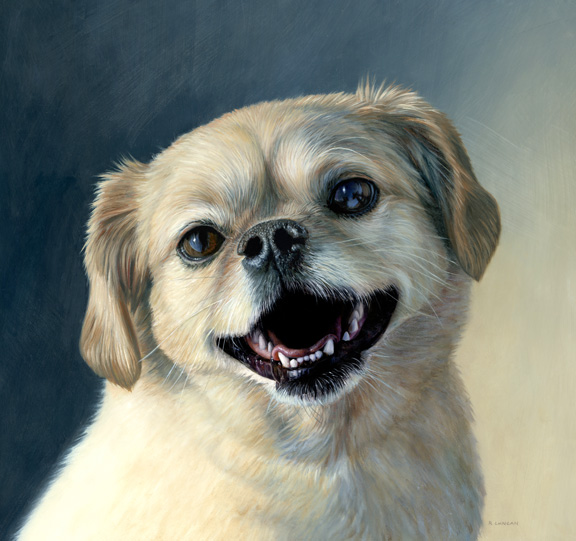 A pet portrait is a gift that will last a lifetime (and beyond!)

Pet portraits take some time to make. But they are worth the wait. The most important part of the process is the planning stage. I like to get the composition figured out right away and take the time to get it right. Carrie and I worked through several ideas until we found the perfect composition.

I put a lot of care into my portraits for two reasons. The biggest reason is that a true representation of the subject honors the connection my clients have to their pets.

I’m also doing it for myself. It’s important to me that my paintings last and using the proper materials and techniques is only part of the equation. Making a work of art that will be interesting to future generations means future generations will take care it long after we are all gone. Likewise, every time I exhibit my work, win an award, or have a painting published I’m adding to the provenance of all of my paintings. Which means they will have a historical context that will add to the future value of my work. Adding value to my work means it will be taken care of.

The Best Part of a Pet Portrait

All of that longevity is important, but the best part of a pet portrait is preserving a well loved smiling face. It’s incredibly meaningful for me to make the special connection humans have to our pets tangible. My glimpse into the bond shared between Carrie, Derek and Sophie was truly a gift and it was an honor to make Sophie’s portrait.

Please visit my commissions page to learn about my process and contact me to get started.

We received the painting and it’s absolutely beautiful! It’s perfect. Thank you so much! Derek can’t get over how closely you managed to capture Sophie, you’re just SO talented. I hope to work with you in the future! 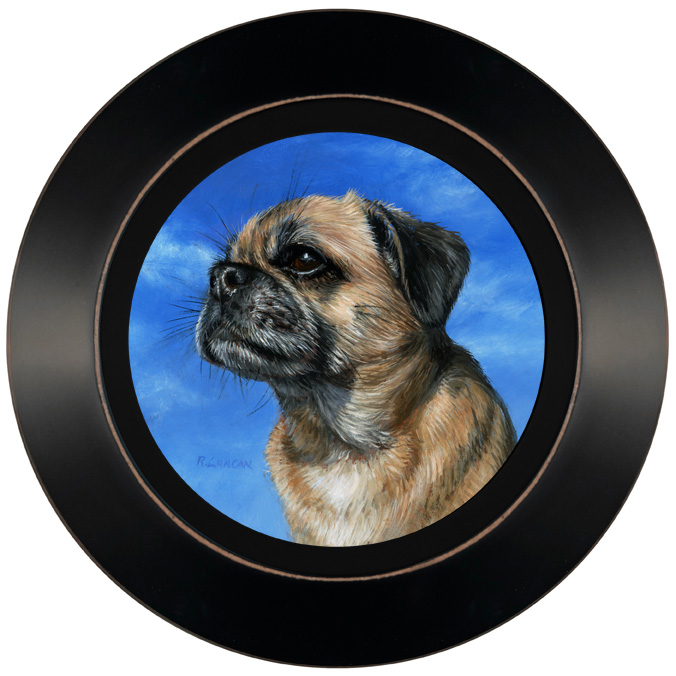 Most of my pet portrait commissions are based on images that come from my clients. I have a couple of blog posts for suggestions on getting photos of cats and dogs that can help get you started. What usually ends up working best though, is to take lots of photos (for dogs at least) when you’re running around at the park. I’m often altering the background of images to simplify it so that the attention is going to the subject of the painting. It’s not often that the background truly compliments the subject. When it does, though it’s something special.

If you do a search for “Portrait Miniature” you’ll find countless classical miniatures, mostly from the 16th – 18th century. Popular in England, France and in the United States (There are probably a million portrait miniatures of George Washington).

At least a third of the paintings that come up in these searches have a blue sky with clouds in the background. They put it perfectly in an article about the representations of clouds in art by the Lawrence Wilson Art Gallery of the University of Western Australia. “The physical position of the clouds, situated between heaven and earth, associates them with a higher order, a characteristic that recurs in art through the ages.” The association is then tied to subject placed in front of the clouds.

I’ve been dying to do a portrait like this for ages. And was fortunate that Theo (aka Thelonious Monk ) has the bearing to pull it off. I can’t look at this painting without imaging a cape on her back. I think of it as puggle portrait painting that reveals the true size of the personality held in such a tiny body.

It’s perfect!! Thank you so much!  Melanie LOVES it, and we found a central spot to hang it. Just in time for her birthday and a gift for the ages…both with Theo, and beyond.
Eternally grateful 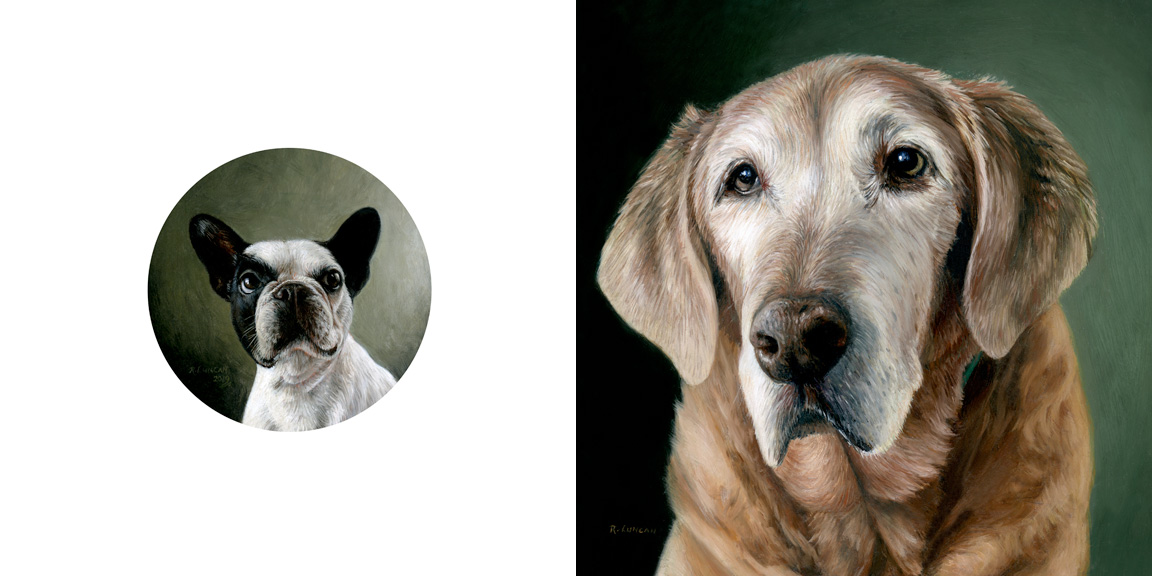 I was commissioned to make two paintings for Jason. The first, a gift for his sister of her beloved dog Hazel. Hazel was a golden retriever that had given a lifetime of love. The other was of Turbo, a lot of personality packed into a miniature 4″ composition.

I composed both of these painting with classical dutch portraits in mind. There were so many great photos for me to choose from of these two. I was especially inspired by the warmth in Hazel’s eyes and the intelligence in Turbo’s.

I was sad to hear that both Turbo and Hazel passed between the time when we designed the portraits and when they were completed. It really reinforces my mission of creating pet portraits though. And I love that their portraits will live on for hundreds of years to come.

I got them today! We are in love! Thank you so much, such talented work!!

To learn about how to commission your own pet portrait, please visit the Commission’s page. 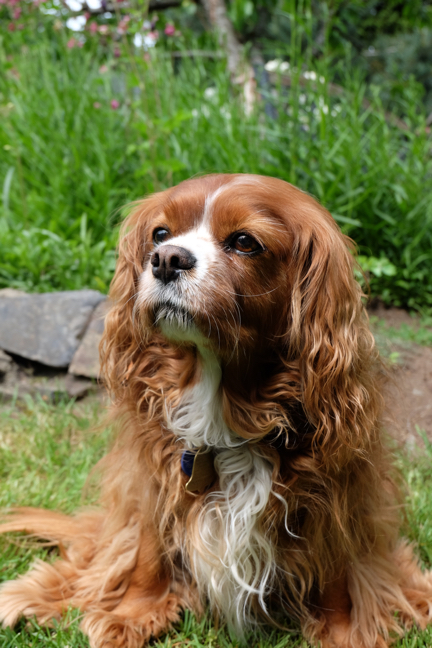 My King Charles Cavalier Spaniel, Mona, has posed for us to help demonstrate how to get the best photos for your pet portrait.

I look forward to seeing your images!! If you’re having trouble or if you’re unable to get new photos, contact me. Good luck!

Visit my Pet Portraits gallery to see some of my past pet portraits and see my tips for taking photos of your cat for a portrait. And now I’m going to have to make a portrait of Mona! Check back in a few months to see which image I end up choosing.

Despite my hungry little bundle joy, (i.e. my adorable, two month old son Isaac), June is off to a great start in the studio. Here’s a peak at four little paintings I’m working on right now.

The first of the lot is of Jolly Rajah, the black cat. I actually started this one months ago as an experiment related to the monthly miniature series (I considered a series of black cats). I had considered this little one finished, and originally it featured a window with a tree in the background. But it didn’t seem right to me, and I ended up going with the Into the Country idea instead. After contemplating it for a while, I’m reworking this little guy. I’m trying out a simplified background now, working to define his features a bit more, and also to create a stronger focal point at his lovely eyes.

I love the beautiful little 1920’s brass and celluloid miniature frame I have for it, so I’m hoping to salvage the painting. I’m also hoping that working through this painting, will help me get a better idea of what will work in the fourteen remaining frames I’ve been collecting in this style. Here’s a link to the finished painting! I love painting animals, but I have to admit to a special soft spot for dogs

This little guy is my top priority in the studio right now. He’s the first of my June Miniature Pet Portrait Specials and will be completed in time for a special occasion. I have added a couple coats of paint since taking this photo, and I plan to have it finished by the end of the week so it can be shipped out to its new home right away. I told you there would be more rabbits! It’ll be hard to separate these two paintings, and I’m considering selling them as a pair. Once they’re finished, they’ll go in a lovely pair of matching antique frames I’ve been saving for just the right couple. I’m planning on three or four more rabbit portraits and will be on the lookout for new models! Contact me if you have a willing bunny!